As Leon and Theia continue on their journey across Glenroth, their path ahead was blocked by a sudden appearance of a gigantic Tornado shaped like a dragon. The tornado created a crack where dark spirits emerged before dissipating into the rapid winds. From a distance, the team saw a mysterious figure stepping out of the crack. Holding a fan made with feathers of the mythical crane, a highly intelligent looking individual approached the gang.

“War of the 3 Kingdoms has arrived!”  the mysterious hero proclaimed.

To be continued… (Written by AvocadoMilk. This story is non-canon xD)

Now, let’s dive in and take a look at this unique new mechanic!

Example Scenario
Suppose the Hero has a stat of 16000 MAG (after buffs are applied) and that the skill description reads 100% of skill damage based off MAG from burning ground for 2 turns. Example of a skill being enhanced. Empower: Add an additional 1 turn(s) to Burning Ground for every 8000 MAG this hero has, up to a maximum of 2 turns.

The debutants of the Three Kingdom heroes will showcase the powers of players who just started off and those extremely powerful experienced users who can push the strength of the hero to their limit! We are looking forward to seeing records broken!

Q: Who else will possess this Empower mechanic?
A: It could be attached to any hero in the future! Look out for it

Hi all! Do note that the numbers displayed are just a sample based on whatever information we received! Let's look forward to the first hero together!

I almost laughed my ass off, but I did not, because there is one super CATCH.

What do you mean this is a chance to showcase the difference between player who just got these heroes and those who can train and build them effectively?
Is the an obvious but undermined Pay To Win model where even Veterans with emiko had already reached a ceiling, and now to introduce heroes who will have IMPROVED (empowered) skill base on thier Boosted stat (which is highly do-able only with 5*~6* Runes, Lv30 Insignia (and the Legacy, Evil Eye), 23 Talent Points-minimum)

Developer, please, you are trying too hard to sell this game. Good Luck with another few months or so into further running this game, I'm just not too optimistic with the whole Roadmap 2018, don't even think IT IS REALISTIC for VF to run that long.
Top

Hmm but 3 kingdoms has so many heroes/characters, would be nice to have more than 1 series.
Top

Power creeping again? I just hope you balance those empower skills I don't wanna see a repeat of op hero getting nerf.

Serious question, do you have a plan to complete the camelot and fairytale heroes or that's it?
Top

Yes sounds like good heroes but they can still empower DL's. Sooo... Cmon let's face it, zoey was okay but cassandra killed the game's "strategy" in its genre.
I mean, cmon? That cassassin is straight cheat. U dont need to raise its atk, just get sure kill with poison and no matter how hard i invested my tanks to get double resilience + 15k def, its still indirectly 1hit KO.
Top

I'm not sure I like Empower as a game mechanic. Abilities already scale linearly with the stats of the hero, so it doesn't make sense to make the ability scale "better than linearly" in such a fashion, where a hero feels gimped if the hero is just directly under the threshold where it crosses over to the next Empower level.

Basically, its unnecessary, and gives p2w a bigger advantage, unless the maximum threshold is easy to reach (easy to reach meaning, is reachable without a single Talent Point), i.e. No more Empower bonuses after reaching 12k-13k stat points. Based on the example, 10000 and 13000 could be 2 MAG thresholds for +1 and +2 turns of Burning Ground.

If the blog is using unrealistic numbers (since MiloD posted "numbers displayed are just a sample"), then perhaps the blog needs to be rewritten to give more realistic numbers so as not to mislead players.
Top 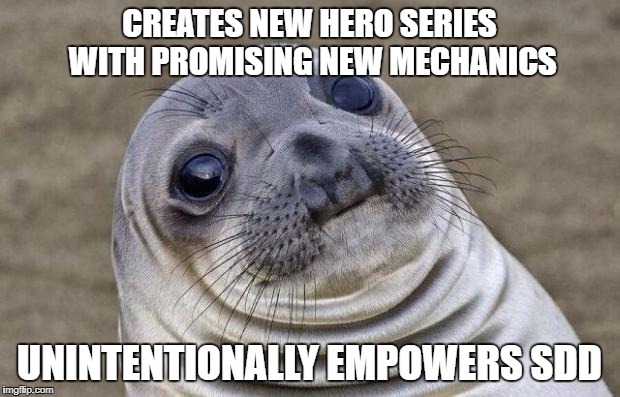 Cool.
But don't forget that this game's title is Valiant Force.
Not Dark Lord Force or Three Kingdom Force or Hex Force.
Valiants should get their revamp 2.0 soon?
They are getting useless as we speak.
And they are supposedly the strongest hero in arathos?

P.s. im joining the memeing
Top
Post Reply
Who is online In total there are 9 users online :: 0 registered, 0 hidden and 9 guests
Users browsing this forum: No registered users and 9 guests based on users active over the past 5 minutes